Brian Purcell #27 The Boys In The Canoe 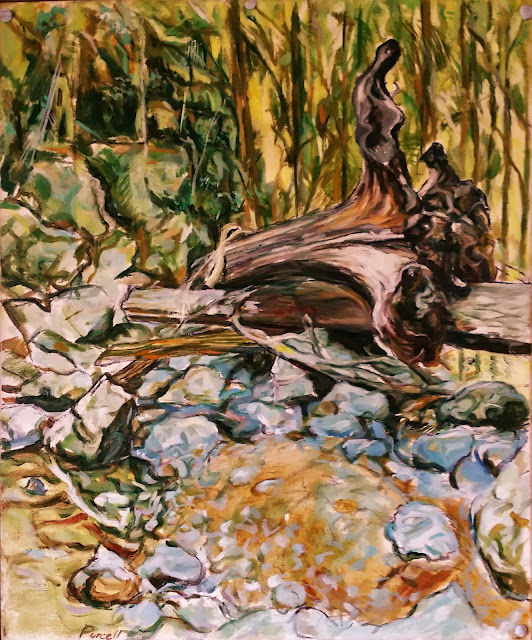 This is my last post for my month in Project 365 + 1 - thanks for the opportunity to contribute as a guest - perhaps I can return later!

The Boys In The Canoe

The Point, Bellingen, Summer
I

The boys in my canoe have plumbed the river
shot the rapids and returned a secret way
spooked by an eel longer than their oar,
stood up to drink in the secrets of the new

ways unsettling their consciousness
stars above their mountain,
a priest on the sandbank turning
from a drinking fountain while other boys

climb trees, hold ropes in a revelation
how many times singing my son, my son
running from the steep bank swinging on a rope
hungry for life and letting go for life

that comes splashing up twice his height
age not ardor, a blue heeler leaps up
for drops of water big as marbles
and down he goes into the golden water

so deep and immense he cannot open his eyes.
They say a bull shark’s down there
carried up with the floodwaters
now trapped and lonely biting into eels

half as long as cars, no metaphor needed since
the river is itself idea, essence, experience
the mauling cauldron of our hopes and fears and families
lie unselfconsciously and float and sink like gods

while King Parrots peck out the eyes of the sun.
Below the kids press mud into their dripping hair
swear like their fathers losing jobs, emptying cartons
their grown brothers throwing wasted bottles of bourbon

into the man-high reeds spattering girlfriends
and wives with the cold spray of failures.
Meanwhile the boys stand in the canoe like sailors
looking for much more than they might expect at home

while the river swoons at our passionate calls and embraces
a teenage boy accuses the other of being a girl and maybe
desires it they take turns to drown each other like unwanted cats.
The road offers its way out if only an unbudgeable tree

at its soft-edged side, the roots drinking the endless blood
of the lost boys and girls while the untroubled sky looks down
like a feckless king or queen on what it cannot touch
on all that it has seen.

past the island that is no longer theirs the flying foxes
wrapped in skins of glory squeal plaintively at the tourists
roasting and floating on their black bladder boats
as they inch their way to Lavender Bridge.

From where do tourists come but our breaking hearts?
Sad vagrants wandering the face of the earth
driven by our laughter from remotest Bellingen
carrying with them the salt of our tears

and our children, following these stoned Pied Pipers
to cities of hard angles and cacophonous tar
neon-lit vistas of limitless opportunity
to wholly remove themselves from what they are.

They carry with them an exuberant light unfurling
from their spines like a flag of profound liberty
but on turning they see a dark, flaring shadow
unscrolling as they walk through the outskirts of the city.

Satellites observe them and their progress
cataloguing loneliness and gradual heartbreak
waiting for their tears to rise to heaven.
They enter the golden arches we have created

and eat and eat as there is no satisfaction.
How do the inhabitants of Eden know it is Eden?
There are leeches and ticks that can bring down a horse
the water is not golden only muddied by the children

but the snakes are benign, beautiful and cannot reason or talk.
At night stepping out from their work in a backlane kitchen
bodies sharpened by angles of artificial passion
the children huddle beneath bridges and crumbling arches

immense structures whose smiles stretch towards heaven
to which there is no entrance and no way out.
As they close their eyes they’re startled by the vision of this cauldron
the façade of the riverbank and massed ascending gums

see the faces of their friends moving in the branches
and weep for the ignorance that is past
for the hours in a cathedral of wood and light and air
and the boys in the canoe drifting slowly beneath them.